SpermBoost is a formulation of traditional herbs with empirical evidence for centuries but now scientifically proven. The formulation is known to improve several parameters of sperm count, sperm viability, sperm morphology  and motility by 300%; these herbs also reduce morphological damage.

How To Cure Female Infertility

Sperm Morphology refers to the shape of your sperm, or what it looks like under a microscope. Specifically, it looks at the shape of the sperm head and the size of the sperm. The head shape is important because it affects the sperm’s ability to dissolve the outer surface of an egg and fertilize it.

Sperm morphology ranges indicate what percent of sperm are considered normal in size and shape. These sperm are the most likely to be able to fertilize an egg, so the percentage can give you a clue about your chances for conceiving with your partner. The ranges will differ from lab to lab, depending on the criteria used to assess the sperm. Stricter criteria will result in a lower normal range.

There are 14 types of sperm morphology. They are:

These have no head at all and are called acephalic sperm or decapitated sperm syndrome. They do not have genetic material or chromosomes. This type of sperm may look like a pinhead sperm but upon close examination, one can see that there is no tiny sperm head giving the sperm the appearance of a loose piece of string.

This refers to when the sperm has a giant head. These types of sperm often carry extra chromosomes and have problems fertilizing the woman’s egg. Macrocephalic sperm may be caused by homozygous mutation of the aurora kinase C gene. This means that because this kind of sperm abnormality may be genetic, fathers may be able to pass the condition on to their son

A variation of the small-head sperm, is when the head appears as a pin with minimal to no paternal DNA content. The presence of pinhead sperm may point to a diabetic condition. 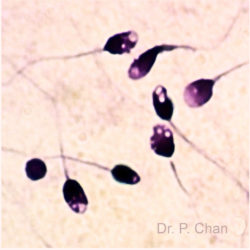 These sperm have two or more large vacuoles (cyst-like bubbles) or multiple small vacuoles in the sperm head. These nuclear vacuoles are visible under high magnification microscopy. While some studies show this type of sperm has low fertilization potential, other studies have shown no effect. Studies are still in progress.

These may be related to defective mitochondria, the energy-making parts of the sperm cell. It may also be a sign that the centrioles, the guidance system for moving chromosomes stored at the sperm neck, may be missing or broken.

Sperm cells with short tails often have low or no motility and are called stump tail or Dysplasia of Fibrous Sheath (DFS) sperm. This tail defect happens during late spermiogenesis or sperm cell formation in the testis. Some patients with DFS also have chronic respiratory disease associated with immotile cilia syndrome. Stump-tail or DFS is an autosomal recessive genetic disease connected with abnormal genes that encode for proteins such as the sperm neck centrin 1 protein. DFS has been linked to a  higher percentage of sperm aneuploidies or abnormal chromosomes.

This  is when the sperm’s head is smaller than normal, also known as small-head sperm. Small-head sperm may have defective acrosome (a pocket of enzymes in the sperm head used to enter the egg) or reduced genetic material.

These are sperm with “cigar-shaped” heads that may indicate the presence of varicocele in the male or constant exposure of the scrotum to high temperature locations such as daily hot saunas. These tapered head sperm often contain abnormal chromatin or packaging of the paternal DNA genetic material. Abnormal number of sperm chromosomes called aneuploidy has been shown in tapered head sperm.

Also known as round headed sperm condition, It is an abnormal sperm morphology that indicates either there is an absence of the acrosome or the sperm is missing inner parts of its head responsible for “activating” or turning on the egg and starting the fertilization process. A variation of this type of sperm is the Decondensing head sperm seen when the sperm prematurely starts to break down its nucleus and the unraveling DNA material fills the entire sperm head.

These can have multiple heads or tails. When the sperm has two heads, it is called a duplicate sperm, a condition linked to exposure to toxic chemicals, heavy metals like cesium, smoke or high prolactin hormone in the male. 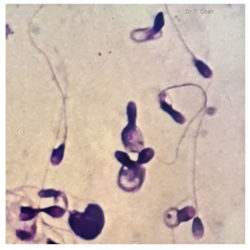 These are sperm that have been exposed to either incorrect seminal fluid conditions or the presence of bacteria. These sperm cannot swim, as their tails are damaged. Heavy smoking has been linked to the presence of coiled-tail sperm. 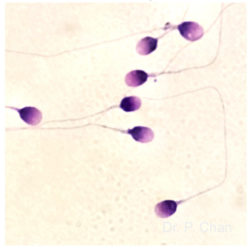 These will have an oval-shaped head, an intact midpiece and an uncoiled single tail. Sperm with normal morphology are able to swim well and in a straight line. Normal sperm will also contain healthy genetic information rather than having too many or too few chromosomes, which are common in abnormally shaped sperm.

Causes of abnormal sperm morphology are:

How To Improve Sperm Morphology

As a man  ages, his sperm can become less healthy even though a man’s body is always producing new sperm. Mostly, sperm production will begin to drop after age 40. Changes to a man’s diet and lifestyle that can improve the health of future sperm include:

Sperm Morphology has a role to play in male fertility, The most common cause of male fertility is low sperm count, nevertheless the sperm shape cannot be ignored because it is needed to be able to penetrate the outer layers of the egg.

Sperm Morphology refers to the shape of your sperm, and it does affect male fertility because it is needed to be able to penetrate the outer layers of the egg.