SpermBoost is a formulation of traditional herbs with empirical evidence for centuries but now scientifically proven.
The formulation is known to improve several parameters of sperm count, sperm viability and motility by 300%; these herbs also reduce morphological damage.

Product can be shipped to U.S.A, UK, Indian, Ghana and Nigeria

NB: Kindly note that this product is in powder form

By the accounts of Nigerian medics, there is an upsurge in the number of couples seeking fruits of the womb in the country, a trend experts attribute to a number of reasons ranging from late marriages, environmental factors and decline in the quality of sperm.

Indeed the situation has given rise, in some instances, to the dislocation of some otherwise ideal families founded originally on love. Worse still, evil merchants, taking advantage of the situation, have set up shops and are surreptitiously trading in babies of indigent mothers like stocks on the floor of the Stock Exchange. Quite a few have been nabbed in the process. Those that bother to do the right thing run accredited orphanages, now with unprecedented patronage. At the spiritual level, some self-professed miracle workers have been at their very best, all in an attempt to convince baby seekers to look into their places of religious worship, and be glad that they did.

Yet, the problem remains that Nigerian men are by the day losing their virility to empirical reasons. On that score, medical personnel are of the opinion that stress alters the reproductive system by impairing hypothalamic function responsible for reproduction in both sexes, fertility declines with age.

They also fingered environmental pollution, substance abuse, obesity in women, and multiple sexual partners that lead to sexually transmitted infections, resulting in tube blockage, as key factors fuelling infertility. Hear Professor Oladapo Ashiru, Medical Director of Medical Art Center in Lagos: “The number of infertile couples is on the increase and more worrisome is that the number of men presenting with low sperm count is on the increase.”Sunday Sun gathered that the statistics has shot up from 15 per cent in men to 40 per cent.

SYMPTOMS
Apart from the first signal of infertility which is the inability to impregnate a woman, other known symptoms of low sperm count are:

Other causes of low sperm count include: 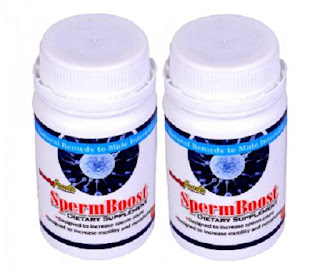 SpermBoost is a formulation of traditional herbs with empirical evidence for centuries but now scientifically proven.
The formulation is known to improve several parameters of sperm count, sperm viability and motility by 300%; these herbs also reduce morphological damage.

It is specially formulated for men diagnosed with a low sperm count – the leading cause of male infertility. Spermboost is very effective in correcting Oligospermia within 30-45 days of administration.

Click here to check the FAQ of this product

Below is a letter written by a concerned housewife to a columnist of a regular Newspaper in Nigeria.Dear AgathaI got married three years ago. My husband and I have been trying for a child since then. There is no place I haven’t been to in my quest for a child.
There is no medication; I haven’t taken in my bid to be a mother. Since women are always to blame for the absence of a child in a marriage, I didn’t bother my husband too much to accompany me for any medical test. I just wanted to please him by having a baby. It wasn’t until I got introduced to my current doctor who insisted that for her to examine me, she must see my husband. Then I pressured him to come with me to see the doctor.
After series of medical examinations, she certified me fit but sent my husband for more tests. Finally, it was discovered that he has low sperm count hence was placed on certain drugs with the instruction that we should make love as frequently as possible.He was specifically told that meeting me during my ovulation period would enhance my chances of becoming pregnant.
Since I didn’t want to deflate his ego, I wisely refused to discuss it with him especially as he didn’t bring it up. The first few months, he abided by the doctor’s instruction but after the third month, he went back to doing things his way.
Sometimes, he won’t come near me for weeks and when he finally does, it is over in a few minutes. When I tried to complain about the unfair way he was treating me, he flared up and accused me of conniving with the doctor to conceal my inability to give him a child; he described the diagnosis of the doctor that he has low sperm count as false and baseless. He promised to surprise me by impregnating another woman. There was no name he didn’t call the doctor and I.
Two months ago, I developed a very nasty itch in my private part; on examination, I was told I have a sexually transmitted disease. When I confronted my husband with the situation, he told me to do whatever pleases me that he has since lost interest in our marriage. He went on to ask what use is having a woman in the house who cannot give him a child?
The pressure is too much and my close friends are urging me to go out of my marriage and get pregnant to keep my husband. Although I have resisted so far but three weeks ago, I ran into an old friend and I am seriously contemplating dating him.I am so confused. Bisi(Culled from Daily Independent)